The Use of Our Senses when Writing

Having pulled a muscle in my back this week, I became acutely aware of how powerful the senses are in creating emotions. It then started me thinking about the use of the senses in the written word and how powerful they are in making our writing come to life. I have no doubt that I have discovered what might be perceived as the obvious to the experienced writer. However, it doesn’t detract from the thrill I felt when it occurred to me just how important the use of our senses is in creative writing.

In previous postings I have shared how difficult I have found it to allow my emotions to surface in the writing of Goodnight Doll. I am once again beginning to appreciate how important emotions are in the telling of stories if, as writers, we have any chance of capturing the attention of our readers. It is so diametrically opposed to the discipline of academic writing, which I have spent more than twenty years attempting to master. I am sure you will therefore forgive my enthusiasm in rediscovering the obvious. I feel like a child who has been given the permission to play with whichever toys grab their attention in the toyshop.

The use of our senses breathes life into our writing and the more vivid our descriptions the more likely our readers will be drawn into the fantasy world we create through our words. The more effective we are in colourfully projecting the scenes and characters, the more we connect emotionally with our readers. So, how do we go about consciously drawing on the senses?

My brother, Eugene, had the most wonderful talent of verbally painting scenery by accompanying the words with emotion and enthusiasm, to the point that you almost felt you have been there yourself. An example that comes to mind was when he had been to see the movie Mame. He described the movie to me so vividly that it was unnecessary for me to go and see it for myself and when I did years later, it was exactly as he had described it. Reflecting on it now, I think it is because of the emotion and enthusiasm that he as the storyteller brought to the story. Upon recounting it to me, he was reliving it in his mind’s eye, which allowed me to see it through his eyes.

As someone who loves food I could probably get carried away with the many ways we can describe different tastes. Again, I find myself drawing on metaphors when attempting to describe the taste of something. I have a certain weakness for cheese and, in particular, the soft cheeses the French are so good at producing. Why then do they taste so different when I have them in England? Simply put, the absence of the sun.
In France such a cheese is infused with the warmth of the sun, when slowly the almost liquid cheese spreads a sense of wellbeing and indulgence as it dribbles down your throat. Trust me, eating the same cheese under the damp grey skies of England do not evoke the same emotion. On the other hand on a grey, cloudy English day, a hot bowl of soup seeps into your bones, wrapping you in a cozy warm hug.

Smell is said to be our most nostalgic of the five senses. It has the power to transport us back to our earlier years, evoking childhood memories. Who does not respond to the warm smell of baking bread? Just thinking about it makes my mouth water. Allowing my indulgence into the m 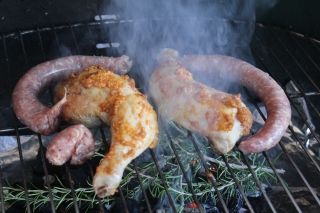 emory, I envisage the butter slowly soaking into the warm bread, running down my fingers. If, like me, you grew up in a hot country you may share my memories of the wonderful smells of roasting meat on the barbecue.

We can all recall the smells of different foods cooking or the powerful fragrance of freshly mowed grass. One of my many childhood memories is the particular smell of washing that has dried in the sun. The use of smell in our writing allows us therefore to transport our characters back to their childhood. Drawing on the sense of smell also allows us to describe situations. Think of the saying, ‘it smells fishy’. It immediately evokes a sense of suspicion or, in other words, personifying the situation.

I am particularly drawn to sound as a powerful way of evoking emotions. The use of music and various sounds in movies is a powerful way in creating the desired atmosphere of a particular scene. I can guarantee as you are reading this, your most favourite horror scene comes to your mind’s eye, complete with its accompanying sounds. The sound of echoing footsteps late at night in a quiet street has the desired effect when trying to create suspense and possibly fear. Equally the absence of sounds is just as powerful in creating an emotional response.

I have for the first time this week come across the word onomatopoeias; another way of describing the comparison of one sound with another. An example would be the meow of a cat that may resemble the sound of a crying baby. It also refers to the imitation of sounds, the honking of a horn or animals noises such as the croaking of a frog, the mooing of cows and so forth. Thinking of sound in this way opens up a whole new way of describing the sound of something when attempting to engage the imagination of the reader.

I think the sense of touch must be one of the most powerful ways to evoke emotion in the reader. Two thoughts come to mind when I envisage touch namely temperature and texture. If I run my fingers across the softness of velvet it may evoke a sense of luxury and opulence. On the other hand the clammy feel of sweaty palms may conjures up emotions of fear or anxiety.

We ignore the the sixth sense at our peril as it can add its own sense of anticipation and drama, signaling events to come. Such as the gut feel of a character when they meet someone for the first time. The sense that something is not congruent about the person may possibly create a sense of foreboding.

Consciously drawing on all of our senses when describing characters and scenes add depth and meaning to our words and more importantly, evoke the power of emotions to draw the reader into the fantasy world we create through our writing. I have to constantly remind myself of exactly that; it is fantasy and therefore I need to let go, have fun and wallow in emotions!

This entry was posted on Monday, February 15th, 2016 at 11:12 am and posted in Uncategorized. You can follow any responses to this entry through the RSS 2.0 feed.
« New Year, New Beginnings
Mindfulness »